As arts marketers, we’re always looking for new and exciting ways to grow our audiences. We want to invite them into our inner circle, and make them feel like they’re part of a growing cultural community.

One of the most valuable assets we can gain from a new patron is their email address. They’ve given us permission to talk to them on a regular basis, and we shouldn’t take that for granted.

There are many opportunities available to help us collect email addresses, including lead generation campaigns on Facebook. Lead ads were launched on Facebook in 2015, and they have become a powerful tool for arts organizations.

Opera Philadelphia has experimented with lead generation campaigns and has increased its audience database in significant ways.

Since 2015, we’ve been working with Opera Philadelphia on their digital strategy. Last season, the Opera Philadelphia team saw an enormous opportunity with La bohème. The name recognition and accessibility of this show made it a great “entry opera,” which meant it was a prime opportunity to find new audiences.

Two months before we launched single ticket campaigns on Facebook, Instagram, Google display, and paid search, we decided to generate excitement with a lead generation campaign.

The lead ads highlighted a contest - users entered to win two tickets to La bohème, and an invite to an exclusive intermission reception. Opera Philadelphia created three different versions to ensure users were seeing fresh posts. We promoted each version for 3-5 days. 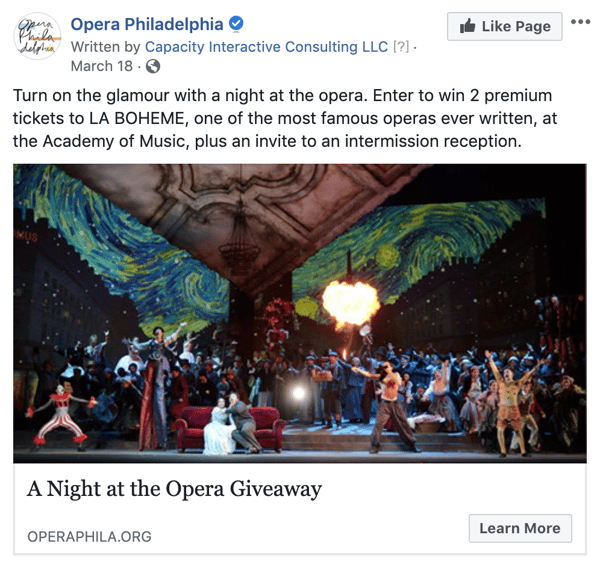 The ad copy was experiential and highlighted a glamorous evening at the opera. The form was simple; it only asked for a user’s first name, last name, and email.

We targeted people in Opera Philadelphia’s universe (website visitors, Facebook Fans), as well as those who might be new to the opera world (Lookalike audiences based off of the La bohème production detail page, and classical musical interests.) We excluded the entire Opera Philadelphia email database to ensure that only new people were served these lead generation ads.

Since it was a short campaign with a limited budget, we optimized quite aggressively, pausing low-performing segments immediately and re-allocating the budget to the strongest segments.

The campaign ran for 14 days with a budget of $400, and generated 585 leads, for a conversion rate of 1.77% and a cost per acquisition (CPA) of only $0.68! Interestingly, 254 of these leads came from fans of Opera Philadelphia’s Facebook Page – these people are already familiar with Opera Philadelphia and are likely to engage with their content, and even more likely to convert in the future.

We downloaded the leads at the end of the campaign and sent them to Opera Philadelphia, who included them in their next targeted email. This anticipated communication helped users feel like they weren’t being ghosted after providing their email addresses.

In addition to generating qualified leads, the campaign also drove ticket purchases for La bohème – 13 purchases for about $2,800 in revenue, resulting in a 597% return on investment (ROI).

Before you run a Lead Generation campaign, there are a few steps you need to take to ensure compliance with Facebook’s guidelines.

3. If your lead generation campaign is for a contest or giveaway, we highly recommend including a giveaway rules page on your site, which can be hyperlinked on the Terms and Conditions slide as well.