Pricing Digital Programming Now and In the Future 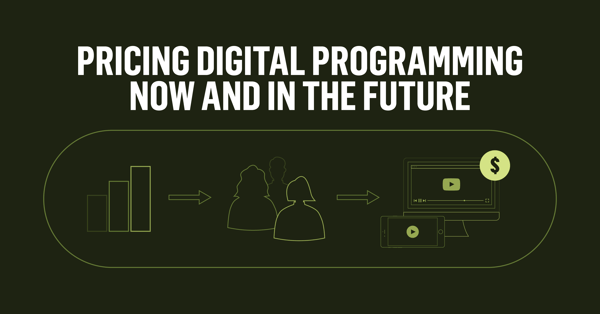 Digital programming for arts and culture isn’t going away. As the pandemic has telescoped out in length, more and more organizations have come to the necessary realization that if they are going to remain relevant during this time, they will need to connect with patrons digitally.

Additionally, these organizations find that a significant portion of these patrons is new-to-file and often not within their geographic area. Lastly, a growing number of patrons have clearly stated that they expect digital interaction with arts and culture to continue. Digital isn’t just critical for us now while we wait for things to go back to “normal,” it will remain vital even once the pandemic is behind us.

The real question we are trying to answer is, “What is this worth to the patrons? What is its value?” The best way to test value proposition is with price elasticity.

One of the biggest challenges is that there are many opinions about what the pricing for digital ought to be. It ranges from folks who are making everything free to charging upwards of $100 for a ticket to a streamed event.

There’s also a contingent who thinks you can only charge $10 because of Netflix. You are not Netflix, which is a six and a half-billion-dollar enterprise. To build an analogy here, if you were a restaurant, and I told you that you could only charge $10 for dinner, that would only be true if you were a fast-food establishment. But you are much more like a farm-to-table restaurant – seasonal, artisanal, local. Yes, Netflix produces an extraordinary volume of digital content, but they don’t do what you do.

What we need isn’t rhetoric; it’s data.
There are helpful surveys around pricing for digital content, but those surveys also have some inherent limitations. A patron will always say they want to pay less, not more.

These surveys can also run into confirmation bias, where we end up proving something that we already believed to be true. These surveys often reveal just as much about how the organization views the value of its content as it does about how patrons view that value.

How do we get a clearer view of what patrons think? After all, they are the ones making the purchase; their opinion matters most.

When we analyzed the partner’s historical data, a few things jumped out right away. The average price paid for in-person tickets (pre-pandemic) had remained remarkably stable over the past three years, always landing around $20-$21. But in the conversion to digital, the average ticket had fallen 78% to less than $5. What was causing this extraordinary drop?

As we were crafting the case study, we also wanted to look at various pricing strategies because one-size-fits-all solutions aren’t effective. We dynamically priced a percentage of the events so that we could look specifically at price elasticity. These events would help us understand not only if the pricing had been correct out of the gate, but if it was wrong, by how much.

Back to the case study—we wanted it to run for a significant amount of time to guard against over-influenced data by seasonal variation. We also wanted to cover as many events as possible. So, we ran the test for 134 events over 90 days.

The results of the case study reveal how far-off pricing for digital can be.

The average ticket for all events increased 54%. This increase is noteworthy, as it speaks directly to patrons’ willingness to pay for digital—in other words, it doesn’t all have to be free.

But the fascinating finding appeared when we analyzed the dynamically priced events. The events had been carefully selected across a broad range of anticipated demand (events that sold thousands of tickets, as well as those that only sold a handful) with starting prices ranging from $5 to $35.

The average ticket for these events was $19.83. This is important because it quantifies how are off perceptions of value were for digital content. When testing specifically for price elasticity, the average ticket nearly came up to pre-pandemic levels.

An important question to ask yourself is, “When I look at digital content, what are the assumptions getting in my way?” I think we place a high degree of value on the experience of going to the venue, but maybe for patrons, especially right now when they can’t go to the venue even if they wanted to, that is not as important as the actual content.

That isn’t to say that this is the case for everyone—not all content is created equal. It’s simply to point out that there is a lot more price elasticity out there and that we need to be taking a serious look at it because it represents unrealized revenue – which, not to put too fine a point on it, is how we pay the bills.

In our final case study analysis, we found that about 20% of the partner’s events should remain PWYW, 80% should require a ticket purchase, and dynamically pricing an event was the best way to optimize pricing.

The focus needs to be on evolving your pricing. The great thing is that there is more and more data coming out about pricing for digital content. It provides us with much-needed context for our decisions. But the most critical data will always be from your buyers. You must test against your perceptions of value and keep testing because you need your pricing to keep pace as behavioral changes occur.

Finally, don’t get down on yourself if you’re just getting started. We had a client sell their holiday performance digitally this past Christmas, and they were so upset after. They had charged $25, but they felt they could have easily charged more. But that is not failure—that initial set of data is gold. It gives them an essential starting place so that the next time they can do even better. As the old proverb goes—the best time to plant a tree is twenty years ago, the second-best time is now.