There’s a lot of debate in the marketing community about whether or not you can successfully sell goods and services, in this instance, tickets, on Facebook. We know that Facebook is one of the best ways to get fans of an organization engaged in the digital space, but could that really translate to ticket sales? Does Facebook advertising work?

We were working with a prominent NYC based performing arts organization who had already committed a chunk of their digital media spend to The New York Times online, but they were also very interested in seeing what Facebook could do. We recommended a relatively minimal spend (in comparison to their other online media buys) and launched the campaign using a variety of targeting methodologies including interests, fan targeting, friend of fan targeting, CRM targeting, and look-alikes.

As you can see from the graphic below, the Facebook ad results were excellent, and they stand out even more when compared to the more “traditional” direct buy on NYTimes.com. 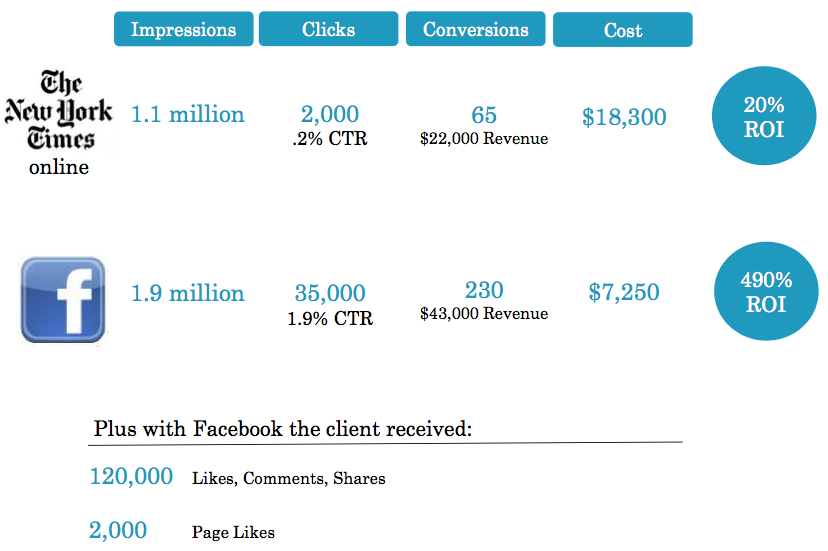 The click-through rate was almost 10x greater on Facebook than on the NYTimes.com. Most importantly, on less than half of the spend, the Facebook promoted posts brought in double the revenue of the NYTimes.com banner ads, which made for an exceptional ROI.

Added benefits of Facebook advertising include tons of engagement with the posts (likes, comments, shares, etc.) as well as 2,000 new page likes for our client.

We hope this case study convinces other organizations that Facebook ads, when set up correctly, are a valuable tool for not only engagement and PR, but, with a minimal spend, to sell tickets as well.