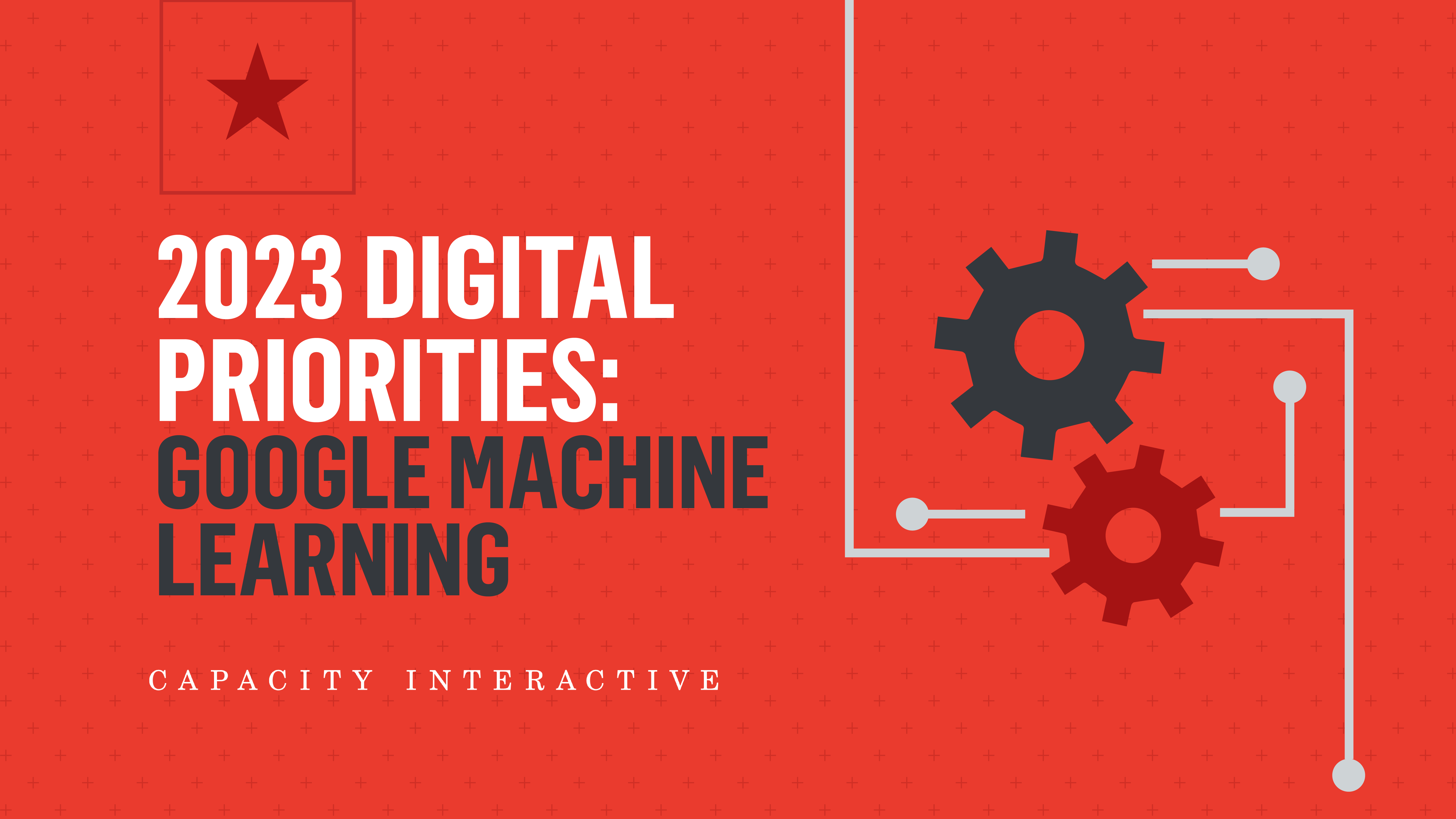 If you regularly run Google Ad campaigns, say hello to your new best friends: dynamic ad formats, performance max campaigns, automated bidding, and data-driven attribution. All four solutions use automation to take the guesswork out of campaign management, saving you time and money in the long run.

Embracing Google’s machine learning and automation should be a top digital marketing priority in 2023 and beyond.

What’s So Great About Machine Learning?

Over the last few years, Google has updated its advertising platform to put machine learning center stage. Machine learning collects and analyzes data from any campaign it runs, then makes decisions based on patterns in that data.

Now, you might be thinking, “Does Google really understand the unique goals and sales cycles of arts organizations?” It’s a great question, and in the early days of machine learning, we were a bit more skeptical. But now, Google has honed in on and prioritized machine learning, which means it’s time to work with the machine rather than against it.

Content is a significant element of Google’s shift towards machine learning. With the introduction of responsive or dynamic ad formats, your Google ads are no longer limited to just a few static images. Instead, you can input multiple headlines, descriptions, images, and videos. Google will test different combinations and determine what performs best based on historical and in-the-moment user behavior.

There are several different types of dynamic ads, so we outlined a few below to get you started. If you’re used to calling the shots, don’t worry—you’re not relinquishing creative control. Google isn’t creating images or writing ad copy from scratch. Your team still determines the text and visual inputs; Google optimizes your campaign performance so you get more bang for your buck. 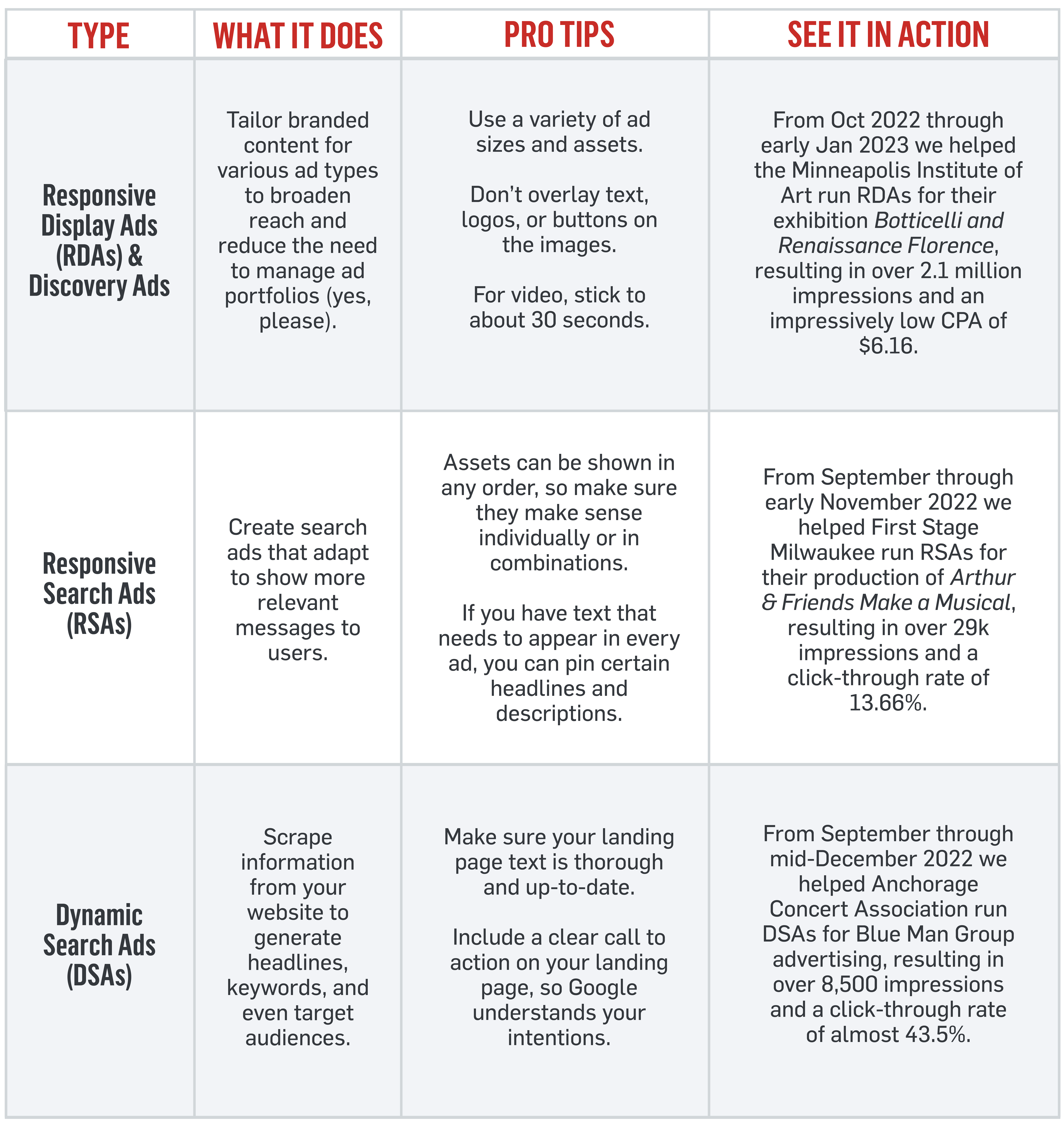 Performance Max (PMax) is designed to run alongside a search campaign and replace Display, YouTube, and Discovery campaigns. PMax allows us to access all of Google’s different inventory types in one place.

Audience Targeting: Instead of the traditional campaign targeting, you provide audience signals, and the machine determines what users to target to reach your campaign goals. Unlike traditional audience targets, where you tell Google specifically who to serve your ads to, audience signals allow advertisers to suggest who they think your ads would be best suited for, essentially providing Google with a starting point. You can indicate you want to optimize for conversions from new customers instead of existing customers.

Placements: The platform determines what placements to serve, which is similar to the multiple placements available in one Meta campaign. It’s worth noting, though, you can’t say what percentage of the budget should go to specific placements, nor can you see where impressions were served across Google properties.

Ad Creation: PMax takes responsive display ads one step further to include image, video, and text options. Using an asset library, you can include up to 20 images and 5 videos, and Google will dynamically create ads for you.

We still don’t know much about this new campaign type, but it’s an obvious progression for the platform and makes a lot of sense for our direct-response campaigns. Hopefully, Google will give us more insight into target audiences, optimization, and placements in the future.

Before automated bidding became available, Google campaigns relied on manual bid strategies. In the days of manual bidding, we would set bids based on historical data, best practices, and gut experience. But that is inefficient, time intensive, and limiting.

Automated bidding allows Google to take on the heavy lifting of setting bids through its machine learning based on many factors, including the performance goals you select. There are several different types of automated bidding strategies to use with the unique goals of each campaign. You have the control to change bid strategy at any point.

In Action: Below are results from a paid search campaign CI ran for three months using two types of automated bidding: maximize conversions, and target return on ad spend (tROAS). The first column shows some of the key performance indicators we monitored during the campaign, and the middle columns compare the maximum conversions effort and the tROAS portion of the campaign.

With each bidding strategy, the platform was able to understand our goals and either drive conversion rates or prioritize ROAS. Both approaches generated great results, but switching to tROAS in this instance generated more revenue and purchases, which was the client’s goal.

As the appetite for digital privacy increases, Google is putting more emphasis on machine learning and positioning those changes as part of a new, enhanced conversion model.

Within this model, Google analyzes all the different ways a user engages with the campaigns until the point of conversion. It also analyzes engagement from users who don’t end up converting. This analysis allows the machine to identify the patterns among various interaction metrics and attribute credit according to the probability of what led to the conversion.

We’ve always known that last-click attribution wasn’t an accurate representation of the user experience. We cannot reach into people’s minds and know how ads impacted their decision-making. Data-driven attribution is Google’s new attempt to consider as many variables and behaviors as possible to build a data model for the future.

These updates can feel overwhelming and almost impossible to navigate. But don’t worry! This is yet another opportunity to consider new ways to think about content, campaign objectives, and evolving data collection in today’s digital landscape. In 2023, let automation do the heavy lifting so you can focus on what really matters.

Ready to let Google’s machine learning lead the way for your digital advertising campaigns? Get in touch with us!